If you’re reading this right now, I suppose that means I finally had the guts to post it. I want to preface this by saying that this is one of those posts that may offend you, or you may relate to it. Or you may be ambivalent. But, its me, raw and honest. I’m not always raw and honest, and I realize I need to practice that more consistently. So I hope you extend grace if you disagree.

I just finished watching “Blue Like Jazz”, the film based on Donald Miller’s self reflective book from a few years ago. I read the book “Blue Like Jazz” while working in Indonesia in 2005. It was certainly a hug stepping stone for me in my journey of faith. Well, the movie certainly does the book justice, and may serve to be yet another stepping stone, as it has inspired this writing. The main character in the movie is Don, a conservative Christian who has just enrolled in a liberal arts school in Portland, Oregon. He was raised in a similar environment as me, a Southern Baptist Church in the South. He had his faith challenged and essentially denied his faith for much of the first year of his higher education.

Towards the end of the movie, Don tells his agnostic friend that he has been “ashamed of Jesus”. It is a powerful moment that helps bring Don full circle in his faith. He ran from God, but God wouldn’t let him.

The phrase “Ashamed of Jesus” stuck with me. I was raised to be bold in my faith, to go door to door, to always have an answer, especially if it was an acronym to lead someone to Jesus. It didn’t matter who that person was, as long as I had ACTS down pat, or had FAITH memorized with my five fingers, I was good to go. You SBC people probably know what I’m talking about.

But somehow in the midst of this a new culture war started. Or perhaps the culture war was already going on and I was oblivious to it. Regardless, I noticed a huge, nasty culture war that really embarrassed me. While my colleagues, friends and classmates were fighting for the rights of trafficked groups, immigrants, and the poor, it seemed that all I heard about was our country’s lack of morals and gay marriage. And personally, I feel like the first group is more Biblical than the second. Don’t get me wrong, in the midst of this I came to know a tremendous group of Christians fighting for trafficked groups, immigrants, and the poor as well, but the other group seemed to be louder. They got air time, and somehow have managed to ‘represent’ all of us. And I noticed people around me outside of the faith have been getting their perception of Jesus-followers from hate filled churches, cruel media personalities, and senile television preachers, while most of the reasonable, kind and compassionate followers of Jesus sit on the sidelines or stay quiet for fear of retaliation (including myself).

I’ve felt embarrassed. I’ve felt awkward. I’ve felt labeled. I worked and still work with people from all sorts of backgrounds with all sorts of belief systems. I hated the thought of them assuming that I shared all the opinions of the more vocal sect of my religious faith. Granted, most of them are incredib 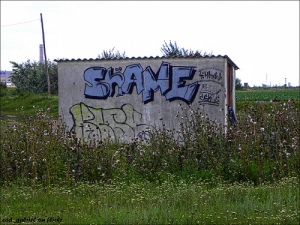 le critical thinkers so I doubt that was the case, but I did have a co-worker tell me that she was a little nervous after I self identified as a Christian. She was afraid I was going to thump my Bible on her desk and tell her to “turn or burn”, ha. Fortunately for her, that was not the case, and our faith dialogues were incredible.

So along the way I guess I felt some shame too, just like Don. I never denied Jesus, I love Him greatly, but there was a bit of apprehension in my heart. I want to be known as someone who loves God and loves people. I want to be known for my mercy, my fight for justice, and my humility. I don’t want to be known for what I’m against, but rather what I am for. And I want to be known as an intelligent, critically thinking, passionate, compassionate individual who just happens to love Jesus and puts HIM as her priority. I fail at it, but I’m getting there. I’m ashamed about the shame I’ve felt, but I’m just being honest. I could be completely wrong on all of this, but I don’t think I am. And maybe I’m not alone.

Christians, have you ever felt ashamed because of how Christianity was represented?

If you aren’t a Christian, do you shy away from Christians because of how someone has treated you or because of the way Christians have been portrayed?

11 thoughts on “Ashamed of Jesus”