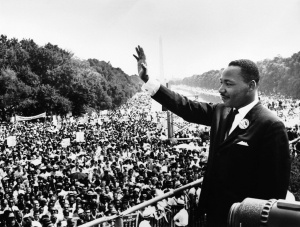 I saw coverage today from the 50 year anniversary of the Walk on Washington for Jobs and Freedom. This monumental event was instrumental for the Civil Rights movement and was a huge moment in our nation’s history. It was where Martin Luther King, Jr. said “I have a dream” and changed the world forever with his words. It was the day that between 200,000 and 300,000 Americans came together to cry out for justice, equality and freedom for minorities in our country. I am so thankful for that event, as it was one of many that blazed a trail of equality in our nation. Dr. King is one of my heroes, I have immense respect for his faith, courage and tenacity to stand up for what is right.

In conjunction with the 50 year anniversary of this event, I also watched the movie “The Help” for about the fourth time a couple nights ago. It takes place at about the time of the March, so it was quite appropriate that it aired on the same day as the reunion. “The Help” always moves me to tears and this past viewing was no different. I am always struck by the grace of the African American maids and am always so ashamed of the behavior of the white women in the movie. I find myself wondering what I would have done if I had been alive 50 years ago. Would I have been silent, or would I have stood up for what is right?

I would agree with many who say that we have come a long way in the last fifty years. When Cheerios cast a mixed race family for a commercial, racist outcries were drowned out by people who saw nothing wrong with the commercial. We are seeing more minority populations respected and esteemed in their fields. Outright segregation is no longer upheld by governing bodies in our countries. We have elected an African American president! We’ve come a long way.

But despite our advances, you can still see the scars of oppression in our country. You can still see the pain of discrimination and the strained relationship between black and white. My white friends frequently will discount the notion that racism is still an issue in our country. They’ll claim ‘colorblindness’ to differences and say that the work has been done. They’ll say that everyone is equal and everyone has the same opportunities. But sadly, I beg to differ. I have heard racial slurs used and seen past symbols of hate used far too often in my suburban/rural hometown. I have read articles, studied statistics and heard stories that demonstrate that African Americans are still stigmatized, profiled and discriminated against on the macro and micro level. They are more likely to be incarcerated for crimes that others would get a ‘slap on the wrist’ for. Their average annual income is significantly less than that of white populations. I saw the pain that emulated from my African American friends after the Trayvon Martin case. One friend, a Christian leader whom I highly respect, stated “Once again we are told that our lives really don’t matter.” I grieved with her, because despite the evidence in the case, despite the due process of court, that case was a symbol to her and many others of the overt discrimination and hate displayed by many towards minorities in our country.

I don’t claim to be colorblind anymore, because I see that there are differences in the way people have been treated. I have felt the phenomena known as “White Guilt” on several occasions where I felt guilty and defensive for what other people in my race have done to minorities. I have felt deeply saddened and ashamed after realizing that I’ve profiled and been suspicious of young white men while shopping or walking around Atlanta in the past. I didn’t know anyone who wasn’t white until I was in the seventh grade. I have thought naively that the high rates of crime in minority neighborhoods was due to the fact that “those people” were more violent than everyone else. I was part of the problem, and I refused to see it until several years ago.

But I’m here today to tell you that I am tired of being quiet. I want to be an agent of reconciliation. I want to have these difficult conversations where I ask the difficult questions. I want to enter into community with people who are not like me. I want to see even more progress made, where a young African American male can walk to a convenience store or walk down the street without being profiled, followed, or killed. I want to see things change, and I’m going to do my part to make sure I’m being the change.

To my friends and readers who are African American, I’m sorry it’s taken me so long to write this blog post. I’m sorry that I was quiet for so long. I promise I’ve been advocating among my social circles for honest conversation and reconciliation for several years now, but I need to take more action. And I’m sorry that so many of you feel like you live in a world where you are still treated less just because of your skin color. I’m so sorry that I naively was part of the problem and didn’t even realize it. I’m sorry that for so long I thought that everything was ‘okay’, because according to the ‘law’ we are all equal.

Hold me to it, and tell me how I can work with you to make things better. I truly believe we can all join together to make a difference. We can achieve Dr. King’s dream, and I want to do my part.

2 thoughts on “Dreams of Reconciliation”